Horoscope of Narendra Modi - A Discussion 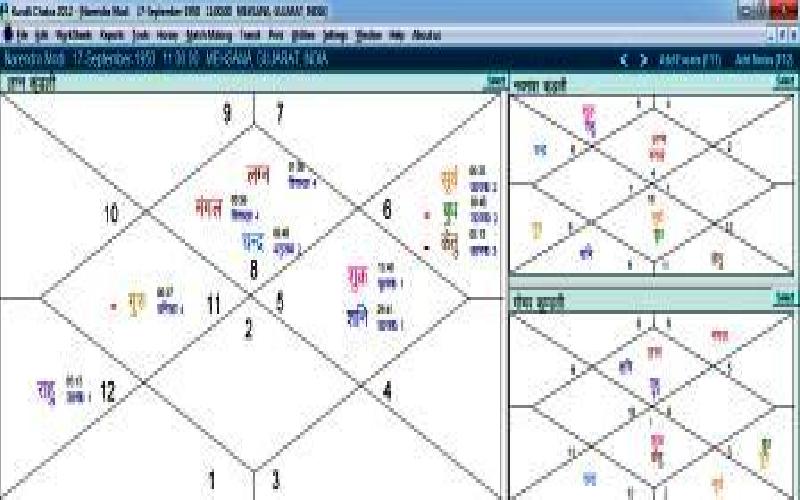 The purpose of this article is to find out according to astrology, why Modi got such a big win in these elections. As of now I don’t know if I would be successful as I have not tried analyzing a celebrity chart ever before and when I tried it this time, there were certain challenges. To analyze the horoscope (birth chart) of Mr. Narendra Modi, I required the correct birth particulars which seemed to be a bigger task.

Jan Lokpal Movement by Anna Hazare and later the formation of AAP (Aam Admi Party) by Arvind Kejriwal, elections was one of the hottest topics in India. There was another name that grew at a slower rate than Kejriwal yet made it to the Prime Minister of India. Needless to tell who this man is but does his horoscope tell the same story.

Horoscope of Mr. Narendra Modi has been as discussed almost as frequently as Narendra Modi himself during the past six months. Several astrology websites and forums have tried to predict the future, past and present of this man who was destined to become the Prime Minister of his country one day.

In order to find out the correct birth particulars (date of birth, time and place) I went through several websites. There was no consensus on place of birth and the time of birth.

While some figured out Libra ascendant, those with Scorpio ascendant also had differences in timings yet they were (surprisingly) able to match the characteristic qualities and events with that of Mr. Narendra Modi with the horoscopes.

What most of them agreed upon was the Scorpio ascendant with the following birth particulars: -

Place of birth: - Mehsana (Some websites believe it is Vadnagar in Gujarat)

Taking this details the horoscope comes out as follows: -

Ascendant: - Scorpio with Mars and Moon

If we believe this horoscope is correct, here are my observations:  -

Looking at all the above macro features that something special though favorable doesn’t come to my mind at least why Modi was such a great success which means I have to dig deeper.

He is currently running Moon Dasha (Period) with Rahu Antardasha (Sub Period). At the time of election results, the Pratyantar Dasha (Sub-Sub Period) was that of Venus.  For moon and Rahu I can understand but why Venus? It should be noted that Venus is the lord of seventh house and the twelfth house.

This Means Moon-Rahu-Venus turned out to be favorable period for Narendra Modi as per as success in politics in concerned. Now consider the position of moon in the horoscope. Moon is with Mars in Scorpio. Though Moon is not very happy in Scorpio, it is posited with Mars which is considered to be a favorable yoga. I consider it to be a strong  yoga in Narendra Modi’s Horoscope. Ninth house lord and ascendant lord in the ascendant will surely do some good for this person provided this is the correct horoscope.

The energy of Mars, the attraction and style of Scorpio and the ability of Moon in interacting with people combined should yield some good results. At the same time it should also not be forgotten that Mars is also the sixth house lord. Mars is also the karaka for this house. Sixth house lord in the ascendant sitting strong would mean this person would have to face opposition to succeed. Mars knows how to defeat his enemies. This seems to be true as none could stand so far in Narendra Modi’s way.

The fame that this person (Narendra Modi) has been getting and the position that he is supposed to get in a few days from now should not be possible without Sun. Here is why I am doubtful: -

Though there is Jupiter aspect on the tenth house, the karaka i.e. Sun should have been strong enough. May be the Sun is yielding opposite results. Like what happens in a Vipreet Rajyoga. If that were true, this is another powerful yoga.

Tenth house should also indicate something which seems ordinary in the very first view. Another very interesting factor is coming up here. Jupiter aspects Saturn, Venus and is placed in the fourth house. Fourth house is for public, Venus is for attraction and Saturn when under Jupiter aspect displays some benefic effects. At the same time fourth house has the aspect of Saturn from the tenth house. This should indicate the name, fame and success that Modi has been receiving throughout his political career.

Mercury, Mars and Rahu are very strong in Shadvarga. I am sure the powerful communicating ability of Narendra Modi has something to do with this Rahu and strong Mercury. I don’t consider Jupiter a very strong planet in this chart yet it provides benefic effects to Saturn and Rahu. Rahu is posited in the sign of Jupiter, the second house lord and has a mercury aspect. As Narendra Modi has told in interviews (I am sorry I don’t have a reference or a recording of that television interview) he is a creative person. This is not our point of discussion yet discussed because success without proper communication is seldom possible.

To conclude, I am not sure if this is actually Narendra Modi’s horoscope but there are certain things that hold true in this horoscope and there are some that I am not sure about. To interpret celebrity charts is always a tough task as if the horoscope was incorrect all the efforts would go in vain. All that is shown in the news channels and written in books about celebrities is not always true.