Role and various signification of mars in vedic astrology 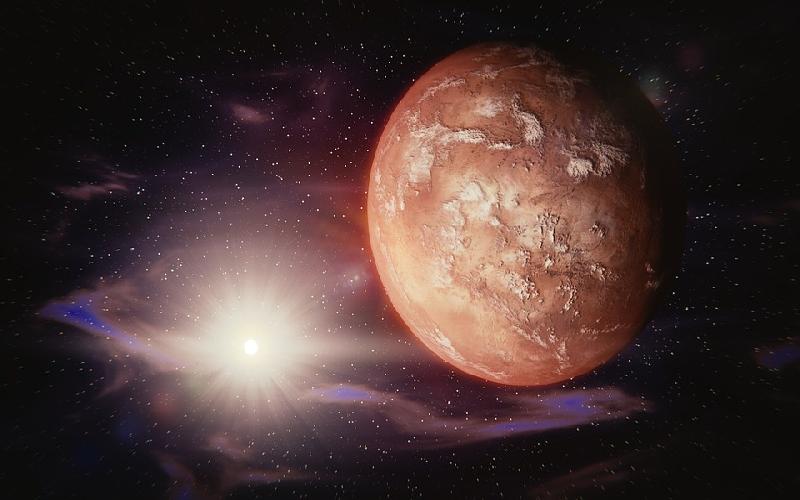 The details and major significations of planet Mars in vedic astrology. This includes the general description of the conjunctions, aspects and many more.

Mars, the aggressive red planet is an important planet despite being malefic. Mars is an action oriented planet with soldier like mentality. First lets look at the major significations of mars in vedic astrology.

Mars owns the sign of aries and scorpio. Mars gets exhalted in capricorn and debilitated in cancer. Mars is friendly towards Sun, Jupiter and Moon and inimical towards saturn and mercury. Venus is neutral towards Mars.

Mars is the karaka(significater) of the 3rd and 6th houses. Wrestlers and all other athletes who are successfull will have a strong mars influencing their chart. Since Mars represents the male friends and brothers in a horoscope, the relationship with them can be judged by mars position in a birth chart. A well placed Mars can give you good physical strenght esprecially if related with the ascendent in any way. Mars represents our driving force or the motivation to succeed. So it is the energy of mars within us that motivates us to work with will power, courage and discipline to acheive our desires. If mars is weak or in the sign of pisces then that person's driving force in life gets weak and wont have the desire to compete. People with weak mars can also feel facing even everyday life and struggles hard. Mars also helps us in fighting enemies and diseases. Mars can give bad anger when afflicted and if mars is placed well then the person will be able to control their anger and express it in a better way. Mars in the 12th, 2nd and 1st houses can trigger sudden anger impulses because these houses represents the head region. Mars is the only planet that is not calm in cancer because it gets debilitated there and thus gets irritated. When Mars is in taurus, libra or pisces, it becomes less aggressive compared to other signs. In these signs Mars becomes somewhat like a peace maker.

When the houses are concerned,  Mars generally does well in the 1st, 3rd, 6th and 10th houses. The 10th house is the best position for Mars to be in. Mars does not generally do well in 4th and 7th houses. Mars gives energy and aggression in the house it sits. For example if mars sits in the 2nd house then the speech becomes aggressive, fast and dynamic but in some signs that person can use a lot of bad words too. Mars is more powerful during the night time so if a person is born at night time then it adds to the strenght of his/her mars in the birthchart. Mars has three aspects. Mars aspects the 4th, 7th and 8th places from itself. The 4th aspect is a protective aspect and the 8th aspect is a destructive aspect. Which ever house Mars aspects, we will feel to take action, overcome and conquer the things related to those houses because mars is a straight forward planet. Similarly, which ever planet is conjunct mars will be affected by the Mars nature and thus becomes aggressive. For example mars conjunct Jupiter can make a person stand up and fight for what they believe in and their teachings become aggressive and direct. Therefore,  Mars is important to succeed in this competitive world.

The major significations, details and true effects of planet Saturn in vedic astrology. This includes house placement effects, aspects and many more..