Will Bad Time End for Nitin Gadkari, the BJP Leader? 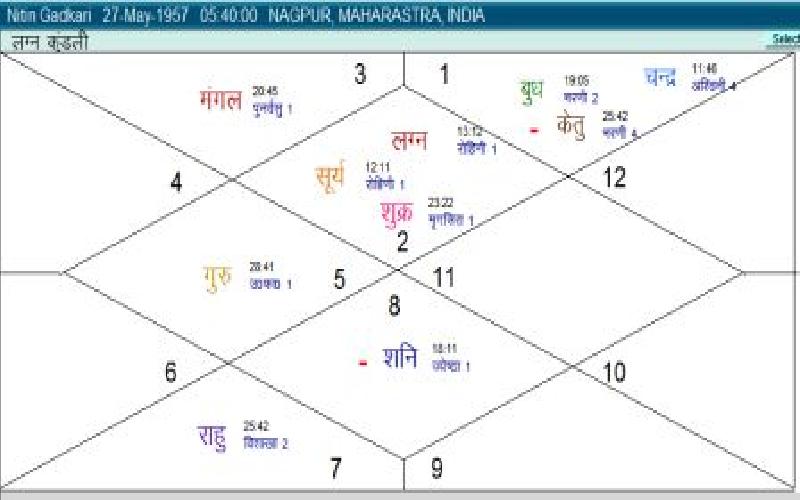 Is this a bad time for Nitin Gadkari? If yes when this should come to an end? Staring his political journey from ABVP (Akhil Bharatiya Vidyarthi Parishad) in 1976, Nitin Gadkari became BJP president of Maharashtra in 2004. During this entire journey Nitin Gadkari has only seen success until a couple of years back when he found himself surrounded by controversies.

Since the second half of 2012, Nitin Gadkari’s political career has never been as it was before. It was the time when Saturn entered Libra in the sixth house from the ascendant (seventh house from the Moon) of Nitin Gadkari. Logically some would say it should have produced some good results for him but if this horoscope is correct, it didn’t happen. In fact Saturn from the sixth house took eighth house, twelfth house and the third house under aspect.

Later, Saturn was joined by Rahu which only worsened the situation. Yet Nitin Gadkari survived winning over Arvind Kejriwal to some extent and managed or is managing the other issues he faced. It was due to the Jupiter aspect from Gemini.

Now when the Jupiter has moved to Cancer and Saturn, Rahu are in Libra Nitin Gadkari could again be seen in news.

I believe until December, 2014 Nitin Gadkari would have to struggle against the issues that block his way. Saturn transit in Scorpio should bring out some good for Nitin Gadkari. I haven’t applied energy in looking at the Dashas as I was not sure of the timing.

Important factors worth consideration are (but not limited to): -

It was difficult to start working on the horoscope of Nitin Gadkari as there were more than one birth particulars for Nitin Gadkari. I would not get into naming those websites but following is what I could get from there:

Time of birth – Not available

Did not reveal the birth data but suggested Sagittarius ascendant with Mars in Seventh while Jupiter in ninth house.

Someone had placed a newspaper cutting on his blog mentioning the date of birth of Nitin Gadkari as 27/5/1957 and Taurus Ascendant which brings out similar planetary combinations as suggested by Website 1 birth particulars for Nitin Gadkari.

There are two ascendants for this – Sagittarius and Taurus.

What I have done in this article is applying logic to the Taurus ascendant instead of putting any efforts in the birth time correction. I have gone with the timing that website 1 suggested.