Horoscope of Shahrukh Khan - A Discussion 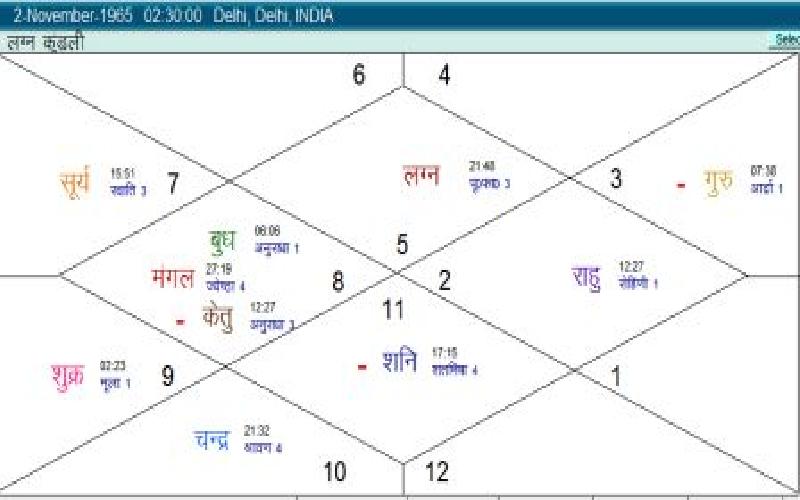 Birth particular of Shahrukh Khan that I have with me are as follows: -

Birth chart of Shahrukh Khan comes out to be as follows: -

Shahrukh Khan has been known for smoking. Second house lord mercury in the fourth house with Ketu could be the probable reason for this. Mercury is not a very favorable planet here. Though it is the lord of the houses it loves i.e. eleventh house and second house, it doesn’t seem to yield very good results for Shahrukh Khan as per the horoscope.

Speech has often created troubles for Shahrukh. People may argue on this but there have been instances where Shahrukh found himself running in controversies due to what he spoke.

This again is for the same reason. Second house lord mercury badly afflicted. Saturn aspect, Mars and Ketu combination and no benefic effect other than Jupiter placed in Gemini is what keeps Shahrukh running in controversies.

Shahrukh Khan has suffered several injuries. Saturn and Mars Kendra yoga has been forgotten by many. Both these powerful planets when undergo such yoga it lands the person into controversies, accidents, injuries and such unwanted events.

Moon, Mars, Saturn and Rahu are four strongest planets in Shahrukh’s horoscope, the role of Venus can’t be overruled here. Look at the divisional charts and you will understand why. Combinations formed in Shahurkh’s horoscope have a greater role to play.

Marriage proved to be a turning point in life of Shahrukh Khan as the career took a real start after his marriage only. Saturn in the seventh in Aquarius, Venus strong in the fifth house (in enemy sign, yet a benefic planet) and both with Jupiter aspect; other important aspect is Mars aspect on the seventh. As a result, this was a love marriage, inter-religious and a successful marriage.

Shahrukh Khan married Gauri Khan on 25th October 1991*. He was running Rahu-Mars-Ketu during that time. Now, I don’t understand this. Why under Rahu-Mars-Ketu did Shahrukh get married? Either there is a correction required in the date/time of birth or the date of marriage. I went through several websites and all of them mentioned the same date as Shahrukh Khan and Gauri Khan’s wedding date. I don’t want to get into that as it would require lot of efforts and still with no guarantee that I get accurate information on life of Shahrukh Khan.

As per Shah Rukh Can, a book by Mushtaq Shiekh, page 104, Shahrukh Khan’s date of marriage is 25th October, 1992. If we consider this as the date of wedding date, Shahrukh was running Ju-Ju-Mercury during that time. Now, here the transits confirm the story while I still have to find out why under Jupiter period this marriage happened.

Mars in the fourth house in Scorpio, also the lord of the ninth house in Shahrukh Khan’s horoscope gives him such a huge place to live in. I will have to check the internet or some books but I guess there should be some basement as well in Shahrukh’s house.

Though Shahrukh had started his acting career quite earlier, he got real recognition from the movie Deewana that released on 25th June, 1992*. I would avoid discussion on the television series as there are different years on the same website for the release of first television serial that Shahrukh Khan worked in. 1992 is an interesting year in terms of Shahrukh Khan’s career.

While Deewana and Chamatkar were successful movies, it is quite justifiable here that Jupiter and Saturn proved favorable for Shahrukh Khan. Mercury is not a very favorable planet as mentioned above it is not clear why Dil Aashna Hai was a flop film and Raju Ban Gaya Gentleman a successful movie while both released during the same period. There was another film released during the same period “King Uncle” (5th February, 1993*) that was again a flop.

I fail to understand here why Raju Ban Gaya Gentleman turned out to be a hit during Ju-Ju-Mer in Shahrukh Khan’s horoscope. A reason that I assume here is that Raju Ban Gaya Gentleman was a multi-starrer movie which could have saved it but I don’t give this assumption much value as in every film there are other stars. Overall 1992 turned out to be a year of success for Shahrukh Khan. I think I should write another article to discuss success and failure of Shahrukh Khan as per his birth chart as this is getting very lengthy.

* Source for the dates: - Wikipedia.org

The various significations of Mercury in vedic astrology. The effects of Mercury's house placement, conjunction, aspect and many more..